The Printery - The Old "Times" Office

This building now known as the "Times" Office was formerly a public school. It is believed to have been the Wirrabilla Public School (four miles from Gunnedah) and had the name and the year "1925" painted on it in earlier years. Presumably, it was built and opened in that year, and closed in 1968. It is assumed the building was moved to Copeton Dam Village about 1969, as a school and was opened by the Department of Education there in that year. It was closed in December, 1973.

The building was subsequently sold by the Public Works Department to a Bingara contractor, R.J Kirk, from whom it was purchased (minus the roof) by the Inverell Pioneer Village trust on Jun 27, 1977, for the sum of $250. The building was moved to the Pioneer Village by Inverell Contractor, B.J Chisholm, who was responsible for its re-construction. The building has been altered to resemble the original office of the Inverell Times, as seen in a photograph of 1876.

The machinery and equipment in the building has been assembled by the management of Northern Mediaprint Pty Ltd., publisher of The Inverell Times, and Northern Graphics Pty Ltd trading at Inverell and Regional Printers.

A Double Royal Printing Press, on loan from the Tamworth Newspaper Company Limited. It is believed to have been used to print "The observer", Tamworth, last century, and was housed in "The Observer" building in Peel Street, Tamworth. "The Observer" was bought by Albert Joseph who established "The Daily Observer" in 1910 and subsequently, the Tamworth Newspaper Company Limited, publisher of "The Northern Daily Leader", When the Leader Building in Brisbane Street was constructed in 1925, the machine was moved from Peel Street to the press room. From that time until its removal to Inverell in about 1974, it was mainly used for printing newspaper posters.

The Alexander Press, made in 1879, was acquired by Northern Mediaprint Pty. Ltd from the Narrandra Argus Pty. Ltd in October, 1974. This press would probably have been similar to the one on which the first "Inverell Times" was printed.

The Model 5 Linotype machine was one of the earlier models and was probably built in the 1920’s. It was bought as a reconditioned machine for setting the Inverell Times in the early 1950’s and became redundant in 1977.

The Hand Platen machine, was an early model of unknown ownership and was given to the Pioneer Village by Mr Neil Eastman, proprietor of W.M Printing, of Inverell in 1977.

The type case, type and other incidental equipment, has mainly come from the office of The Inverell Times. 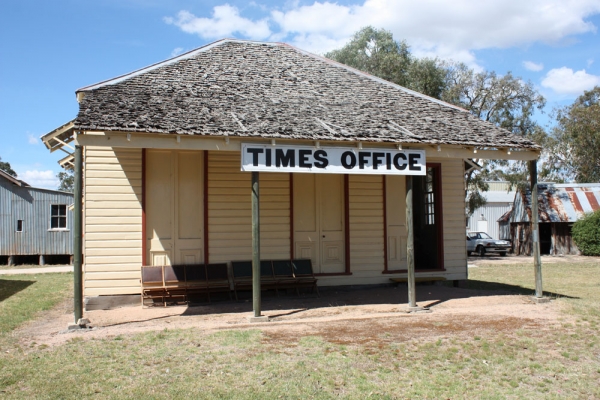 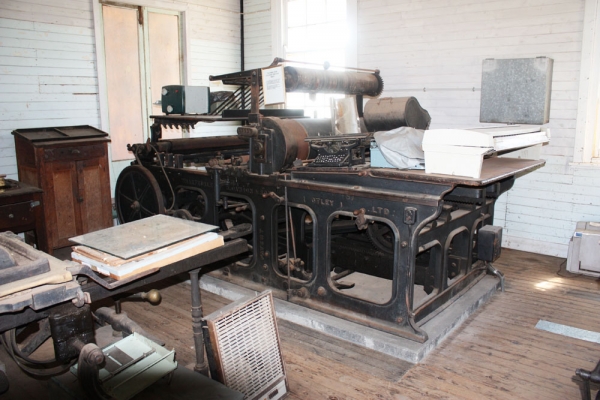