The Nullamanna Church was donated by the Methodist Conference of NSW and transported and restored by the Inverell East Rotary Club.

The history of the church is largely the story of the people who used it. It is a simple functional building erected by local people to serve their spiritual and often social needs. The word "Nullamanna" is thought to mean "land of snakes" and it is first mentioned officially in the Government Gazette of 1848 where George Wyndham’s run is listed as Bukkulla and Nullamanna an area of 150,000 acres.

Following the James Robertson Land Act of 1861, many smaller settlers availed themselves of the right to free selection and this was further increased after the Closer Settlement Act of 1902. The years between 1902 and 1920 were probably one of the greatest years of prosperity this district has known, for it was during this period that its great farming potential was realised. Small settlements such as Nullamanna developed at this time.

The Methodist movement reached New England in 1859 and expanded rapidly until 1891 comprising 7.3% of the population. This church was built in 1901 during the ministry of Rev. James Watson. The first trustees were John McRae, Robert Dundas, George McRae and Thomas Treneman. The first organist was Miss Ina Munro. Other families in the congregation were those of Watson, Scott and Coulter. The church was used also by Presbyterians and Salvationists and later, after the Anglican Church was destroyed by fire, it was used by the Church of England.

The custom of church going and church marriage was very strong and great numbers attended church on Sunday. Horse riders, crowded farmers’ carts and family gigs made their way to the sound of the bell for the Sabbath  dutifully, if somewhat gloomily, duringEdwardian times.

This church was re-dedicated on the 25th November, 1973, as a denominational church and handed over to the Inverell Ministers Fraternal. At the dedication it was stated that the "concept of a gentle Christ born in a humble manger has been told many times in great choral works sung within the walls of some of the world’s finest buildings, but the ultimate message, that of the never failing friend, has never been more perfectly stated in all its simplicity than in the simple tune sung in a bush church. It is this spirit of simplicity that the Village hopes to preserve for the benefit of our children who will be part of an increasingly complex society. 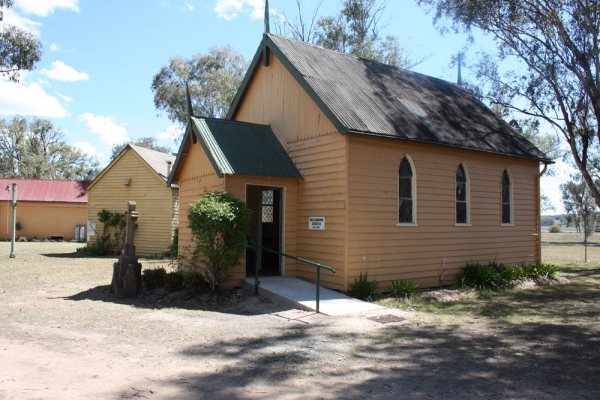