Agriculture has played a leading role in the development of Australia as a nation. So too, the ingenuity of Australian farmers has played an important part in the development of agriculture throughout the world. Inverell has long been an agricultural centre and the Pioneer Village has a collection of machinery which demonstrates the advances that have been made over the last century.

Harvesting equipment begins an antique flail, early box strippers, two very early harvesters and the first auto header to come to the North West. An early Canadian threshing machine and one winnower are also displayed. Some of these machines have been restored and are capable of being restored to working order. Together the incredible story of mans challenge to the soil in Australia.

Horse drawn rolling stock comprises sulkies, buggies, wagons, wagonettes, drays, ploughs and mowers. There are four different types of horse works used in agriculture and mining. Horse works were a mechanism in which a horse was tied to a pole and then walked in a circle. This motion caused a shaft to revolve to which a pulley was attached. The pulley on the shaft was then linked to the pulley on the desired machine. Chaff cutting, grain grinding and such tasks were performed. A large cutter and double bagger capable of cutting one thousand bags a day is a prized possession. Displayed is the steam engine from Abington woolshed which is operational and works on special occasions. Other stationary machines operated by hot air; steam, gas, kerosene and petrol have been collected over ten years. 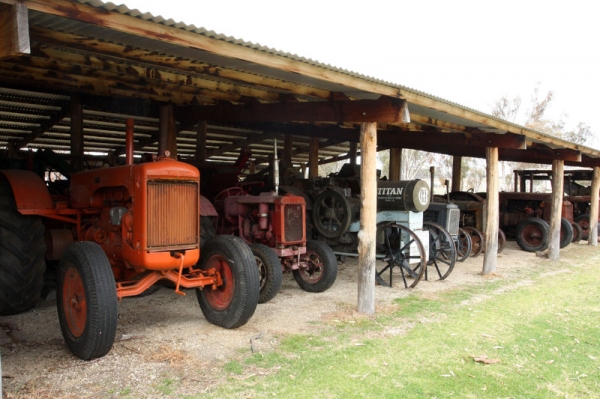